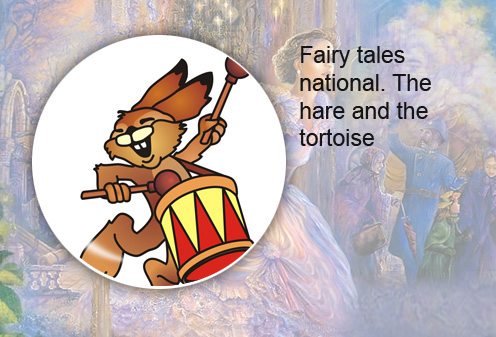 "Come on slow buck" they would call out as he came trough the grass towards them. The tortoise would blink at them with his beady eyes and continue slowly on his way until he reached the spot were he wanted to settle down. The liveliest of all the animals there was the hare. He run so fast that he was always the first to arrive. "Just look at me", - he was boasting one evening, - "I can run faster than any of you, my speed and quickness will always win". The tortoise ambled into the clearing last as usual but to everyone surprise he did not go to his usual place. Instead he went slowly across to the hare. "Since you run so fast could you beat me in a race", - he asked. "I?.., beat you?.., in a race?..," - ex-claimed the hare. And he fell on the ground and held his sides he laughed so much. "Of course I could beat you. Youve made the distance tortoise but dont make it too far for you short little legs." And he burst with laughter again. Most of the other ani-mals laughed too. It did seem a very comic idea. The fox were fought they would see some good sport said, - "Come on then tortoise name the distance and a time and then we will all come to see fair play". "Let us start tomorrow morning at sunrise", - sug-gested the tortoise. “Well run from this clearing to the edge of the forest and return to this spot again along the bank of the river.“ Right, it will take you all day to go so far, tortoise. Are you sure you wanna go ahead with it," - asked the hare. He dreamed all over his face of the fought of the easy victory he would have. "I am sure", - replied the tortoise, - "The first one back to this clearing will be the winner". "Agreed", - said the hare as the tortoise settled down in some long grass to sleep for the night.
The next morning the clearing was full of animals who had come to see the start of the great race. Some run along to the edge of the forest to make sure that both animals follow the proper rout. Others choose good places to watch along the way. The hare and the tortoise stood side by side as the sun rose the fox called out "Ready!.. steady!.. go!.." The hare jumped up and was out of sight almost at once. The tortoise started off in the same direction he plodded along picking up his fits slowly then putting them down only a little in front of were they had been before. "Come on, tortoise" called his friends anxiously. But he did not lift up his foot to wave it in as the hare had done he kept on moving slowly forwards. In a few minutes the hare was alone away from the starting line so he slowed down. "Its gonna take the tortoise all day" he fought. "So theres no need for me to hurry. He stopped to talk to friends in nearby juicy grass here and there along the path. By the time he reached halfway the sun was high in the sky and the day became very hot. The animals who were waiting there saw the hare turned back towards the clearing. They settled down for a long wait for the tortoise. As he returned by the river the hot sun and the grass he had eaten made the hare fill sleepy. Theres no need to hurry" he told himself. "Heres a nice shady spot". And stretched himself comfortably he laid down with paws beneath his head he murmured sleepily. "It wont mere if tortoise passes me, Im much faster than he is, Ill still get back first and win the race". He drifted off to sleep. Meanwhile the tortoise went on slowly. He reached the edge of the forest quite soon after the hare for he had not stopped to talk to his friends or eat tempting fresh grass. Before long smiling gently he passed the hare sleeping in the shade. The animals in the clearing waited all day for the hare to return but he did not arrive. The sun was setting before they saw the tor-toise plodding towards them. "Wheres the hare" they called out. The tortoise did not waste his breath in answering but came steadily towards them. "Hurrah!.. Tortoise has won!.. Well done slow buck!.." The animals cheered. Only when he knew he had won the race did tortoise speak. "Hare?.. Ou!.. Hes asleep back there by the river". There was a sudden flurry and with great speed the hare burst into the clearing. He had woken and seen how long the shadows were realized that he had slept much longer than he intended. He had raced back to the clearing but he was too late. Tortoise smiled and said "Slow and steady wins the race".