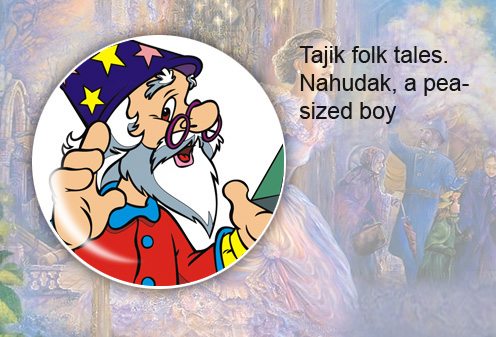 Once upon a time there lived a peasant with his wife in a village. They had no children, and that is why their life was sad and joyless.

One day an old man with a long white beard knocked at their door. The peasant opened the door and let the old man in.

The peasants wife laid the dastarhan — a table¬cloth —with refreshments, brought a decorated tea-pot with aromatic green tea, a piala — a beautiful cup, and fresh, flat cakes of bread. The woman laid soft blankets on the sufu — a raised platform on the ground made from clay — and made the guest sit down there.
After the white-bearded old man had had tea and flat cakes, he thanked the hosts and said to them:
" Let your cherished wishes come true!"
Soon the cherished wish of the peasant and his wife came true. The peasants wife gave birth to a son. He was so small that his parents named him Nahudak, meaning "a small pea".
Time passed and Nahudak began to help his mother keep house. The mother wanted to bring water and the son was already running to a canal with a bucket. The mother thought of cooking rice soup, and Nakhudak was cleaning rice already.
One day the mother cooked lagman — noodles with minced meat — and was going to take it to her husband who worked in the field. Nahudak ran up to his mother and said, "I will take it to father, mommy!"
He put the bowl with lagman on his head and went into the field. He walked and sang songs. The people were surprised: the bowl was running by the road and was singing songs! They could not see who carried the bowl.
Nahudak got to the field, ran up to his father and said, "Have a seat, my dear father, have lunch! I myself will mow!"
. "You will not lift the reaping-hook!" his father laughed.
" I will!" answered the pea-sized boy.
While his father was having lagman, Nahudak mowed half of the wheat field. The father was very glad and praised his son.
Nahudak went back home. He walked and sang songs. Suddenly he ran across a wolf. The wolf was hungry. He seized the pea-sized boy, but could not swallow him — tiny Nahudak stuck between his teeth.
The wolf ran farther and saw a large flock of sheep. He was about to seize a sheep when Nahudak cried out of the wolfs mouth, "Hey, Uncle Shepherd! The wolf wants to take away your sheep!"
The shepherd heard these words and drove away the wolf.
The wolf ran farther. Goats were grazing on the glade. The wolf was about to seize a little goat when Nahudak cried out again, "Hey, goats! Beware! The wolf wants to take away the little goat!"
The leader of the flock, a sharp-horned goat, heard these words and ran toward the wolf directing his sharp horns at him. The wolf escaped by the skin of his teeth!
Wherever the wolf ran, whatever he wanted to seize with his sharp teeth, the pea-sized boy would cry out of his mouth.
The wolf could hardly drag his legs. He was tired and grew weak from hunger. He wanted to get rid of the irrepressible boy as soon as possible. He wanted to spit him out of his jaws, but it did not work. Nahudak was stuck in his teeth firmly. The wolf began to shake its head, but this did not help either.
The wolf ran farther. Then the wolf saw a deep pit in front of it. The wolf stopped. It occurred to the wolf to push the boy out of its jaws with its tongue. Nahudak fell down into the pit. The wolf was very glad and ran away.
Nahudak was lying on the bottom of the deep pit and did not know how to get out. Then the boy began to cry for help.
Soon he saw an old man with a long white beard near the pit. He had a stick in his hands. Nahudak rejoiced and shouted, "Grandfather! Grandfather! Give me the end of your stick! I will hold it and get out of here!"
The old man with the white beard was the magician who was treated by Nahudaks parents. He understood at once who was calling him. He bent over, looked into the pit, and saw a tiny boy. Then he lowered his stick into the pit.
Nahudak seized the end of the stick and climbed up quickly.
The pea-sized boy thanked the old magician and ran home.
The parents saw their son and became very happy. In celebration of their sons return they made a feast for all the villagers.
Everyone rejoiced: Nahudak, the pea-sized boy, came back home!
Lets rejoice with them!

Once upon a time there lived a peasant with his wife in a village. They had no children, and that is why their life was sad and joyless.