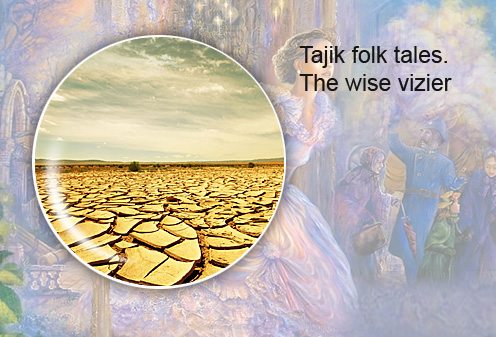 The king of the state did not know what to do, or how to save his people from inevitable death. He thought and thought, but could not think of anything. Then he decided to give up his throne to his vizier for a year, and he left to go to his brother, the king of a neighboring country.

The vizier became the ruler of the state. Now he began to think about how to save the people from starvation. He thought and thought and finally found a solution. He went to the kings treasury, took out all the gold and silver coins and gave them to citizens of the state on an equal basis. He said, "I am lending this money to you. Go to other countries, where there was no drought, and where they reaped a rich harvest. Buy grain and flour there. Buy as much as needed to not starve and to last till the next harvest. You will return your debt to the treasury after the kings death."
The people were very glad. They took the money and bought grain and flour in other countries. They escaped inevitable death. The people were very happy and wished their king long life.
One year passed. The king returned to his palace. He had hardly dismounted from his horse when the viziers enemies whispered into his ear that the vizier had robbed the kings treasury — he had given out all the gold and silver coins to citizens of the state.
The king got angry and ordered the vizier be put to death. When the executioner was about to chop off his head, the vizier said to the king, "O my king! Let me tell you a few words before I die."
" Tell!" agreed the king.

Then the vizier said, "I really gave out all your treasury to the people. They got gold and silver coins to buy grain and flour in other countries. This way they escaped inevitable death. I lent them the money, and they should return it after you die. Now all the people wish you, 0 my king, good health and many years of life!"

When the king heard this, he understood that his vizier was a very wise man. He not only saved his people from starvation, but he made them love their king and wish him a long life. The king understood this and forgave his vizier. He did not put him to death.
This way the wise vizier saved the people and himself from death.