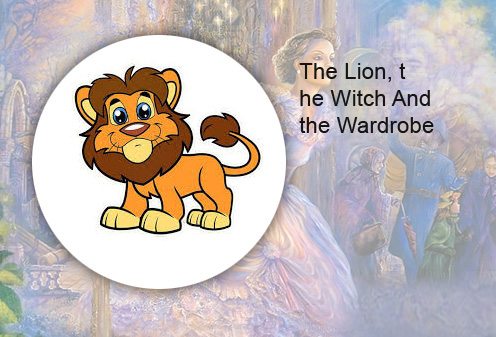 Chapter One
LUCY LOOKS INTO A WARDROBE
ONCE there were four children whose names were Peter, Susan, Edmund and Lucy. This story is about something that happened to them when they were sent away from London during the war because of the air-raids. They were sent to the house of an old Professor who lived in the heart of the country, ten miles from the nearest railway station and two miles from the nearest post office. He had no wife and he lived in a very large house with a housekeeper called Mrs Macready and three servants. (Their names were Ivy, Margaret and Betty, but they do not come into the story much.) He himself was a very old man with shaggy white hair which grew over most of his face as well as on his head, and they liked him almost at once; but on the first evening when he came out to meet them at the front door he was so odd-looking that Lucy (who was the youngest) was a little afraid of him, and Edmund (who was the next youngest) wanted to laugh and had to keep on pretending he was blowing his nose to hide it.
As soon as they had said good night to the Professor and gone upstairs on the first night, the boys came into the girls room and they all talked it over.
“Weve fallen on our feet and no mistake,” said Peter. “This is going to be perfectly splendid. That old chap will let us do anything we like.”
“I think hes an old dear,” said Susan.
“Oh, come off it!” said Edmund, who was tired and pretending not to be tired, which always made him bad-tempered. “Dont go on talking like that.”
“Like what?” said Susan; “and anyway, its time you were in bed.”
“Trying to talk like Mother,” said Edmund. “And who are you to say when Im to go to bed? Go to bed yourself.”
“Hadnt we all better go to bed?” said Lucy. “Theres sure to be a row if were heard talking here.”
“No there wont,” said Peter. “I tell you this is the sort of house where no ones going to mind what we do. Anyway, they wont hear us. Its about ten minutes walk from here down to that dining-room, and any amount of stairs and passages in between.”
“Whats that noise?” said Lucy suddenly. It was a far larger house than she had ever been in before and the thought of all those long passages and rows of doors leading into empty rooms was beginning to make her feel a little creepy.
“Its only a bird, silly,” said Edmund.
“Its an owl,” said Peter. “This is going to be a wonderful place for birds. I shall go to bed now. I say, lets go and explore tomorrow. You might find anything in a place like this. Did you see those mountains as we came along? And the woods? There might be eagles. There might be stags. Therell be hawks.”
“Badgers!” said Lucy.
“Foxes!” said Edmund.
“Rabbits!” said Susan.

But when next morning came there was a steady rain falling, so thick that when you looked out of the window you could see neither the mountains nor the woods nor even the stream in the garden.

“Of course it would be raining!” said Edmund. They had just finished their breakfast with the Professor and were upstairs in the room he had set apart for them—a long, low room with two windows looking out in one direction and two in another.
“Do stop grumbling, Ed,” said Susan. “Ten to one itll clear up in an hour or so. And in the meantime were pretty well off. Theres a wireless and lots of books.”

“Not for me” said Peter; “Im going to explore in the house.”
Everyone agreed to this and that was how the adventures began. It was the sort of house that you never seem to come to the end of, and it was full of unexpected places. The first few doors they tried led only into spare bedrooms, as everyone had expected that they would; but soon they came to a very long room full of pictures and there they found a suit of armour; and after that was a room all hung with green, with a harp in one corner; and then came three steps down and five steps up, and then a kind of little upstairs hall and a door that led out on to a balcony, and then a whole series of rooms that led into each other and were lined with books—most of them very old books and some bigger than a Bible in a church. And shortly after that they looked into a room that was quite empty except for one big wardrobe; the sort that has a looking-glass in the door. There was nothing else in the room at all except a dead blue-bottle on the window-sill.
“Nothing there!” said Peter, and they all trooped out again—all except Lucy. She stayed behind because she thought it would be worth while trying the door of the wardrobe, even though she felt almost sure that it would be locked. To her surprise it opened quite easily, and two moth-balls dropped out.
Looking into the inside, she saw several coats hanging up—mostly long fur coats. There was nothing Lucy liked so much as the smell and feel of fur. She immediately stepped into the wardrobe and got in among the coats and rubbed her face against them, leaving the door open, of course, because she knew that it is very foolish to shut oneself into any wardrobe. Soon she went further in and found that there was a second row of coats hanging up behind the first one. It was almost quite dark in there and she kept her arms stretched out in front of her so as not to bump her face into the back of the wardrobe. She took a step further in—then two or three steps always expecting to feel woodwork against the tips of her fingers. But she could not feel it.
“This must be a simply enormous wardrobe!” thought Lucy, going still further in and pushing the soft folds of the coats aside to make room for her. Then she noticed that there was something crunching under her feet. “I wonder is that more mothballs?” she thought, stooping down to feel it with her hand. But instead of feeling the hard, smooth wood of the floor of the wardrobe, she felt something soft and powdery and extremely cold. “This is very queer,” she said, and went on a step or two further.
Next moment she found that what was rubbing against her face and hands was no longer soft fur but something hard and rough and even prickly. “Why, it is just like branches of trees!” exclaimed Lucy. And then she saw that there was a light ahead of her; not a few inches away where the back of the wardrobe ought to have been, but a long way off. Something cold and soft was falling on her. A moment later she found that she was standing in the middle of a wood at night-time with snow under her feet and snowflakes falling through the air.

Lucy felt a little frightened, but she felt very inquisitive and excited as well. She looked back over her shoulder and there, between the dark tree trunks; she could still see the open doorway of the wardrobe and even catch a glimpse of the empty room from which she had set out. (She had, of course, left the door open, for she knew that it is a very silly thing to shut oneself into a wardrobe.) It seemed to be still daylight there. “I can always get back if anything goes wrong,” thought Lucy. She began to walk forward, crunch- crunch over the snow and through the wood towards the other light. In about ten minutes she reached it and found it was a lamp-post. As she stood looking at it, wondering why there was a lamp-post in the middle of a wood and wondering what to do next, she heard a pitter patter of feet coming towards her. And soon after that a very strange person stepped out from among the trees into the light of the lamp-post.

Chapter One
LUCY LOOKS INTO A WARDROBE
ONCE there were four children whose names were Peter, Susan, Edmund and Lucy. This story is about something that happened to them when they were sent a